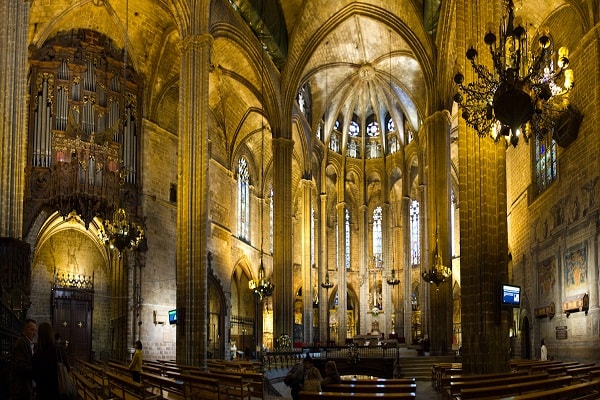 Barcelona Cathedral (also known as La Seu) is a celebrated example of Catalan Gothic architecture dating from the 14th century. Its graceful spires can be seen from throughout the Barri Gòtic (Gothic quarter) of Barcelona.

The elevated site occupied by the cathedral has always been the spiritual center of Barcelona. First there was a Roman temple here, then a mosque, and then a church. Construction on the present cathedral began in 1298 under King Jaume II and was completed in 1448. The west facade dates from the 19th century.

Gaudi's La Sagrada Familia may be Barcelona's most famous landmark (and rightly so), but La Seu still holds it own as one of the most impressive cathedrals in Spain.

A blending of medieval and Renaissance styles, Barcelona's cathedral features large bell towers covered in Gothic pinnacles, high Gothic arches, a handsomely sculptured choir and many side chapels with rich altarpieces. The interior was recently cleaned. Especially notable is the Cappella de Sant Benet behind the altar, with a magnificent 15th-century interpretation of the crucifixion by Bernat Matorell.