Places to stay in Barcelona

Spain with kids is a wonderful adventure. If a vacation along the sunny Mediterranean is your goal, try family-friendly resorts in Barcelona. You can visit kid-friendly museums as you munch on churros. You won’t go far anywhere in Spain without seeing a football field or a park where kids can run and play.

Barcelona has emerged as one of Europe's most popular tourist destinations, and it's not hard to see why. With a stunning diversity of architecture, from the medieval of the Barrio Gótico to the Modernism of Antonio Gaudí, works from artists such as Roy Lichtenstein and Claes Oldenburg on street corners, world class museums and galleries, and music festivals such as The Festival del Grec every June, the city has a wealth of culture to offer its visitors. It is divided into different barrios, all of which are completely individual and are perfectly spaced to explore on foot. Barcelona is enjoying a culinary renaissance, too, and boasts some of the most inventive cuisine in the world. Go here to drink wine in lively bars, savour the taste of Spain in traditional tapas restaurants, and soak up the atmosphere of this vibrant and cosmopolitan Catalan city.

Travel on trains and metros is easy, and you’ll find major airports in Barcelona (BCN). Family-friendly accommodations in Barcelona are plentiful from spectacular luxury hotels to simple serviced apartments. Barcelona’s endless miles of Mediterranean Coast offer waterfront resorts, rental villas for families of all sizes, and an array of charming hotels.

Most tourists stay in four areas of Barcelona which are near downtown central square Plaza Catalunya, in the Cuitat Vella historical area of Barcelona, in the Eixample 19th century modernist expansion area of the city after Barcelona's medieval walls were demolished - or in the Sant Marti area, which is the newest modern high tech district near Barcelona beaches. Plaza Catalunya is the most central area of Barcelona. Ciutat Vella and Eixample have most sights and attractions and Sant Marti area is popular in the summer because it is close to the best beaches.

You could stay anywhere in the city centre that is connected via a Metro underground stop. The metro serves most of the areas in Barcelona with tourist attractions. If however you want to be right in the middle of where all the action is then you would need to stay around La Rambla or Barri Gòtic (Gothic Quarter). This area also has some of the best transport connections in terms of buses, metro and train via Plaça Catalunya station, which is at the top of La Rambla.

This smart and stylish hotel was opened at the beginning of 2010, and is located in the up-and-coming area of district 22@, just a short walk from the beach and Rambla de Poble nou. Its 142 rooms are equipped with complimentary wire-less and cable internet connection, outside direct line telephone, air conditioning, safety deposit box, full bathrooms with shower or bathtub, and hairdryer. Some of the rooms are with splendid views to the Mediterranean sea. In the same building Is the Restaurant with local cuisine, a cocktail bar, and the fitness room with steam bath and sauna. Furthermore there is a Internet Corner with pc connected to internet and parking in the same building.
Read More 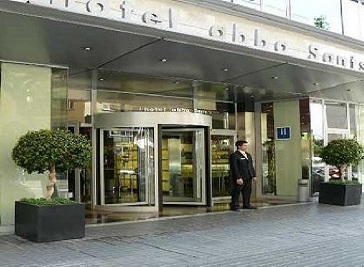 Abba Sants hotel 4*S is strategically located in the city center of Barcelona, in a peaceful area next to landscaped gardens.
Only 5 minutes to the Barcelona Trade Fair, the Montjuic congress hall and the 'Sants' train station. 140 Rooms. Meeting rooms for up to 200 people. 'Amalur' Restaurant, Executive Floor, Business Center and Car Park.
Read More