Eat and Drink in Barcelona

A city that lives by the sea is going to host excellent fish but Barcelona also grows its own wine nearby and the Catalans love Cava as well as plenty of local Catalan wines. A simple trip to the markets will show you how passionate these food lovers are, with displays that pull you in and tasters that ensure you buy. In Barcelona you plan 3 meals ahead. But be warned dinner is a late affair with most locals chowing down between 9-10 pm.

In Barcelona, more than most other European cities, eating out on a budget can mean dining in style - as long as you know where to go. Everyone loves tapas but sometimes you can’t face another plate of patatas bravas. Forget standing in a crowded bar trying to avoid being stabbed in the eye by a tourist wielding a cocktail stick loaded with chorizo: it’s time for a proper meal, with chairs, and tables. But restaurants in a place such as Barcelona can empty your wallet quickly; the answer is a menú del día, the ubiquitous set lunch. The best offer good value and quality and they’ll see you through to the evening and back on the tapas trail.

Low fare flights make this city attainable and it’s a city break with a beach just in case you need a break from the streets. Barcelona has it all tapas, fiduea or paella, great grilled meats and fish. El Bulli (at a time the world's best restaurant) now a cullinary academy is up the coast but has inspired many chefs in the city to create new dishes with flavours of old.

Barcelona has the most bars and restaurants per capita in Europe, and you'll never be far from a place to have a snack. However, you'll quickly realize that most places offer nothing but bocadillos and bravas, and of wildly varying quality. That does not mean that you cannot have a good meal in Barcelona, but most likely, you'll want to have a look around before sitting down.

Coffee in Barcelona comes in two languages and three broad categories with minor variations. With a light breakfast, a croissant for example, you drink café con leche (or café amb llet in Catalan). At other times and after meals, you drink café solo (simply un café in Catalan), which is an espresso, or un cortado (un tallat), an espresso 'cut' with a dash of milk. Café doble, a double shot of café solo, is a fearsome caffeine hit, but be careful when you order it - if the waiter sees that you are foreign they might bring you a café Americano, a solo with water. Ask for a café solo corto or muy corto - a solo with less water - if you want to take caffeine to extremes. The muy corto is just one small gulp of coffee at the bottom of a cup. Also try the carajillo, a café solo with brandy. If you don't mind being difficult, ask for a carajillo quemado - a burnt carajillo with a smoother brandy flavour. A good restaurant should do this for you, but a normal bar probably won't. 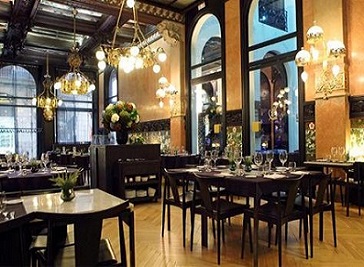 Gastronomy is one of Hotel España's major commitments, with Martín Berasategui as gastronomic manager. The restaurant is located in the Modernist dining room originally designed and decorated by Domènech i Montaner, a rich environment of historical value in which the older features enhance and inspire the new.
Read More 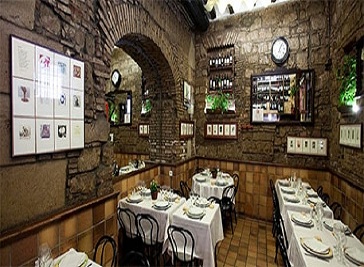 Cal Pep presents a new way of cooking, different from the typical format of appetizers, entreés, then dessert. They have a fresh and bright culinary view, an understanding cooking, with easy and quick preparations.
Read More

Suckling lamb, roasted in a clay oven is our speciality. The technique is simple but insuperable, for this reason it has remained the same for time immemorial. Little more is needed to accompany such a natural dish: red wines from La Ribera, seafood from Castile and, of course, a good appetite and good company.