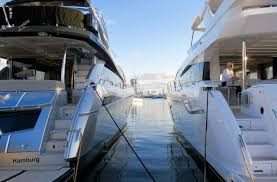 The Barcelona International BoatShow, which will be held on 2018, will bring together the widest offer and the latest nautical and leisure products.

For the first time ever, the Show will take up the five halls in the Gran Via Exhibition Centre and the On-water Show in Port Vell will exceed the 670 boats that were displayed in the previous show.

A highlight of this year’s show will be the first BCN Dive, dedicated to the underwater world, on the first few days of the International Boat Show of Barcelona. BCN Dive will be held in pavilion 5 of the Gran Vía exhibition centre and expects the participation of around a hundred companies.

Over 55,000 visitors.
Over 200 indirect exhibitors.
The largest display of yachts, oats and accessories for sailing, fishing, surfing and scuba diving.

On the occasion of its fiftieth anniversary, the Barcelona City Council awarded the event the Gold Medal for Sporting Merit in recognition of its promotion of the sector and for helping to put the city on the international map. Organized annually by Fira de Barcelona, the show enjoys the support and cooperation of ANEN (the Spanish Marine Trade Association) as well as other major players in the sector.